Think of a WordPrint as an object’s thumbprint or blueprint. It helps list out the words and meanings that you give to things and uses the basic structure of an atom to picture these relationships.

WordPrints show how identification is created by putting descriptive words around an abstract image.

When we first hear of new things they can seem complicated. Sometimes complicated feels wrong, but remember, it’s just a lack of familiarity that makes them seem confusing. If we pause for a moment, take a breath, get calm and walk through it – things become pretty simple. Remember, everything you are familiar with today was once unknown, unfamiliar and brand new to you.

A WordPrint can be used to describe anything and make it familiar. Each WordPrint has a name, an abstraction and a set of descriptions. These bits of data are located in three positions- positive, negative and neutral. Don’t worry too much about understanding this right now, some of it will be more important in the Self-Engineering course due out at the end of this year. For now just focus on the simple way that words come together around a name in order to help us label objects.

The surrounding descriptions are not the object, they are pieces of a linguistic puzzle that unite to help us recognize the abstract image as different from others. These descriptions are ‘negative’ to it because they flow toward and revolve around its name, which acts as the attraction. In a very real way this surrounding set of information makes up the object’s ‘self’.

This next WordPrint visualizes the dynamics of your personal ‘self’ coming to life around your abstract Awareness.

Identity Re-positioning uses the WordPrint to clarify beyond doubt that underneath your changing personal self there exists an unchanging Intelligent Awareness. You probably thought about something like this before and maybe now you can visualize it clearer. There are some people who never noticed this until now because they lacked a way to describe it.

Too many people, by default, think that their personal self is their identity. As a result they are defined by the never ending barrage of thoughts, emotions and circumstances in their personal life. It’s the trap of mortality which we are all born into.

We use descriptive information to make the unknown familiar. Descriptions build familiarity. The more familiar we are with something the more capable we are of recognizing and making use of it.

Daily interactions depend on whether or not we understand certain descriptions. For example, if we are standing in your kitchen and you asked me to get a ‘red coffee mug’ down from the cabinet I need to be able to recognize what ‘colors’ are and what ‘red’ is as opposed to green, blue, yellow, etc.

Also, I need to be able to recognize mugs, cabinets and what it means to ‘get a thing’ in order to carry out your simple request.

If the set of information I hold lacks certain WordPrints (in this case, one for the concept of color or what it means to be red), I will be unable to recognize what you are asking for. Frustrated, I might react by thinking or saying “Red? There is no such thing!”

The ability to recognize something depends on our understanding… This is a direct result of our set of information, concepts and WordPrints.

Imagine a time when you didn’t know what colors were. During those first few years none of us knew about blue, green and orange (and most everything else around us). Eventually someone pointed to each, named them, and gave them a set of descriptions. They passed their WordPrints on to us. As a result, our own personal set of information grew. Most likely, no one passed on the concept of your identity as Awareness. You probably only thought your ‘self’ was the only option. 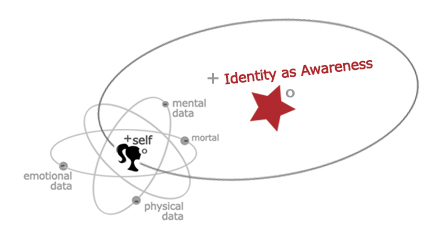 The next lesson will present a particular concept of the self which will further help you see the advantages of re-positioning your identity from limited self to Intelligent Awareness.